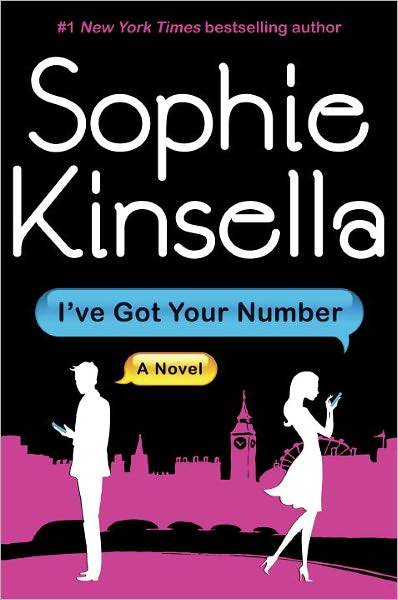 Poppy Wyatt has never felt luckier. She is about to marry the ideal man, Magnus Tavish, but in one afternoon her ‘happy ever after’ begins to fall apart. Not only has she lost her engagement ring but in the panic that followed, she has now lost her phone. As she paces shakily round the hotel foyer she spots an abandoned phone in a bin. Finders keepers! Now she can leave a number for the hotel to contact her when they find her ring. Perfect!

Well, perfect except the phone’s owner, businessman Sam Roxton doesn’t agree. He wants his phone back and doesn’t appreciate Poppy reading all his messages and wading into his personal life.

What ensues is a hilarious and unpredictable turn of events as Poppy and Sam increasingly upend each other’s lives through emails and text messages. As Poppy juggles wedding preparations, mysterious phone calls and hiding her left hand from Magnus and his parents… she soon realises that she is in for the biggest surprise of her life.”*

I know it’s been ages since I last wrote something, and it’s been about a month since I last finished a book! I’ve been swamped in college stuff (still am) and this weekend is the most time I’ve had to myself in a while, so I instantly picked up this book the moment I saw it. I wanted to read something light and funny to contrast the depressing schoolwork I’ve had to deal with, and seeing as how I’ve always liked Sophie Kinsella’s witty writing style with the humor and attitude we could all relate to, I decided to read I’ve Got Your Number. This book has been on my radar since last December, when I heard that Sophie’s going to publish a new book. I even called up local bookstores in excitement, only to find out that they’re all releasing the book on February 14, Valentine’s Day. I totally forgot about it until I happened to walk by a Fully Booked store and it was on display! And once I started, I couldn’t put it down.

Poppy Wyatt is engaged to the man of her dreams – the famous academic Magnus Tavish, with his heartbreaking good looks and abundance of sex appeal – and he’s given her the perfect engagement ring, a family heirloom, to boot. Everything is going as planned, until Poppy loses the ring. In addition to that, her phone gets stolen. How could everything go so horribly wrong? But then she spies a phone in the bin – and it still works! Finders keepers. Poppy can now give out a new number in case the ring is found. All is well… until she meets the phone’s owner, Sam Roxton, who does NOT appreciate her going through all his messages. Poppy really needs the phone, though, so she strikes up a deal with the stoic businessman: she gets to keep the phone while the ring is missing, and she forwards all his text messages and emails to him on his other phone. Easy peasy. But as Poppy and Sam enter each other’s lives with a constant stream of text messages and email, with wedding preparations and strategic ways of making sure Magnus and his parents never find out about the ring, Poppy finds that out that though her life as she knows it could be destroyed, she is not alone; An unexpected person will come and help fix it.

Okay, about this book. Oh my goodness, this book. So much fluff and good vibes! Call me a sap, but the last few chapters really did me in. I know this is a standard romantic comedy, with a spunky heroine and an expressionless-but-somehow-finding-a-way-to-be-hot hero, with coincidences and misunderstandings that are too convenient for the plot, and there is no rational reason why I love these stories, but I LOVE IT. I don’t know, there’s something about the text messages Poppy and Sam send back and forth that seem real to me. I really know people who send one word messages like Sam, and people who vomit smileys and kisses like Poppy, and it all goes so well in this cyber era where most modes of communication through phone.

There’s also this quote at the end that really gets me all mushy everytime I read it.

Also, I think Poppy is a very relatable character. She tries her best to help, but doesn’t want to help herself because of all the fuss it would bring. I can understand that. And though other people might get annoyed at how heroines fuss about feelings, I don’t blame her for her doubts in this one. She is a genuine person, and I really enjoyed reading from her perspective.

One thing that irked me quite a bit was the footnotes thing. I know it was because Magnus and his family were all intellectuals who have published in academic journals, and it was Poppy’s way of mocking them, but I first read this from an ebook and it’s really tough trying to move back and forth between bookmarks to see what comment she added. It really irritated me in the beginning, but I got the hang of it and enjoyed it in the end.

I’ve been reflecting on the modern device as a way to forge and strengthen relationships. It’s still not the same as meeting face to face and having a good talk, but in the hustle and bustle of life nowadays, it’s quite an acceptable method of getting to know another person more. I like how Poppy and Sam first start getting to know each other through the phone Poppy nicked from the bin, and later on meet up, for some emergency or other until… you know. I think face-to-face bonding still couldn’t be substituted for anything, and I appreciate how Kinsella integrated that into this novel.

…And I still cannot get over how the book ended. It was very sweet and creative and so beautiful. I’d read the whole thing again just so I could get set up for that ending, that’s how much I love it.

I recommend this book for people who want a light and fun read! I somehow managed to read this in the middle of writing a lab report and answering an online exam for my Chemistry class, and it didn’t make me feel burdened at all. In fact, it got me so inspired to finish everything I need to do just so I could go back and relish the fun parts! Haha!

One thought on “{Book Review} I’ve Got Your Number”