A short, sleek novel of encounters set in Tokyo during the witching hours between midnight and dawn, and every bit as gripping as Haruki Murakami’s masterworks The Wind-Up Bird Chronicle and Kafka on the Shore.

At its center are two sisters—Eri, a fashion model slumbering her way into oblivion, and Mari, a young student soon led from solitary reading at an anonymous Denny’s toward people whose lives are radically alien to her own: a jazz trombonist who claims they’ve met before, a burly female “love hotel” manager and her maid staff, and a Chinese prostitute savagely brutalized by a businessman. These “night people” are haunted by secrets and needs that draw them together more powerfully than the differing circumstances that might keep them apart, and it soon becomes clear that Eri’s slumber—mysteriously tied to the businessman plagued by the mark of his crime—will either restore or annihilate her.

After Dark moves from mesmerizing drama to metaphysical speculation, interweaving time and space as well as memory and perspective into a seamless exploration of human agency—the interplay between self-expression and empathy, between the power of observation and the scope of compassion and love. Murakami’s trademark humor, psychological insight, and grasp of spirit and morality are here distilled with an extraordinary, harmonious mastery.*

It was the last week of 2012 before I realized that I had blog challenges for myself. While I have given up the 2012 Debut Author Challenge for naught, I remembered that my personal challenge to finally read a Haruki Murakami book once and for all still has hope. I happened to have a copy of After Dark ready, and because I was sick for a couple of days, I had all the time in the world to devour all 191 pages of it.

So how was my Murakami experience? The first and only word that brands itself in my mind at the moment is surreal. This is a story set after hours – after the sun has set and dissolving as the sun’s rays penetrate the horizon. Unlike what you would expect for a book set in this time frame, though, the pace is rather slow. Murakami has a way of weaving strange curiosities into his writing, making you feel like an entity that is invisible, and everywhere all at the same time. I don’t know if this was brought on by being in my sickbed, but reading the whole thing felt like a dream. Details and such just floated beyond me, and what remained was an odd mixture of desolation and a burning desire to understand what was going on. I felt like I belonged to the world of Mari and Takahashi and the other characters, people who seemed so mysterious and fascinating in the veil of night, wandering as everything is cloaked in impenetrable darkness dusted with the light of the moon.*

One of my favorite quotes from this book was by Mari Asai:

“You know what I think?” she says. “That people’s memories are maybe the fuel they burn to stay alive. Whether those memories have any actual importance or not, it doesn’t matter as far as the maintenance of life is concerned. They’re all just fuel. Advertising fillers in the newspaper, philosophy books, dirty pictures in a magazine, a bundle of ten-thousand-yen bills: when you feed ’em to the fire, they’re all just paper.”

There’s a darkly whimsical element in the book that kept me curious all throughout. This wasn’t even a plot-driven kind of book, but because of Murakami’s skill, I enjoyed it in all its passiveness and floaty quality. Honestly, I still don’t know what to make of it. I still couldn’t understand the deal with Mari’s sister, Eri, and her peculiar sojourn into the television set, among other things. However, I’m choosing to just go with the flow and accept my inability to understand, so that I can appreciate the way it was written, and because it is beautiful.

*Aaaand here was my attempt to sound poetic. Forgive me. I had Moonlight Sonata playing in the background and I somehow got into the zone. 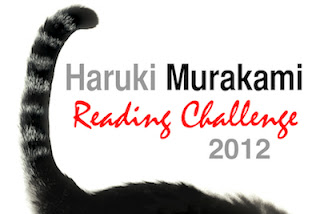 This blog is still relatively young, and I’m still trying to understand how this really works – while running one – so I decided to join a challenge and spice things up a bit!

As you can see, my challenge is something related to that author whose books you always see propped up prominently in your local bookstore, and whose name you probably pronounced slowly the first time you read it. Yup. In this challenge, the rules are simple: read at least one Haruki Murakami book this year, and write a review about it. Okay, let me admit this: I have never read any of his books. I know, I am missing something major here. I actually just found out this year that Murakami is male. I always, always thought he was female. Now I can’t wait to read his books! Keep an eye peeled for a Murakami review sometime this year, guys!

The Haruki Murakami Reading Challenge 2012 is posted by tanabata. To read more about it, click here.