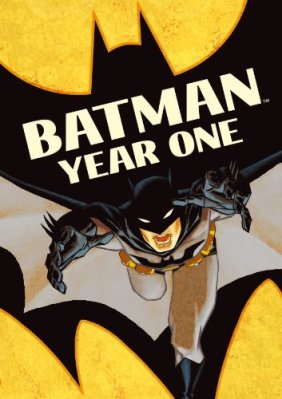 Batman: Year One is an animated film released by DC and Warner Brothers Animation last year (gosh, it still feels weird saying that). It chronicles the transition of Bruce Wayne to Batman, and how Jim Gordon’s adjustments in his newly inhabited detective position in the Gotham Police Department. The movie is based on the four-part comic book series of the same name by Frank Miller and David Mazzucchelli (see previous post). It was co-directed by Sam Liu and Lauren Montgomery, with the voices of Bryan Cranston, Ben McKenzie, Eliza Dushku, Jon Polito, Alex Rocco, Katee Sackhoff, and Jeff Bennet as Jim Gordon, Batman/Bruce Wayne, Selina, Commissioner Loeb, Falcone, Det. Essen, and Alfred the butler, respectively.

If you have read the comics, you would be delighted to know that the movie follows it faithfully. It’s like seeing how you imagined it all this time – well, it was for me, anyway. If you haven’t, fear not. This is a brilliant way to ease into the series (if you ever plan to) while also serving as a good background primer for the esteemed Dark Knight.

The story begins with two of the main characters entering Gotham City. Bruce Wayne is returning to his hometown after twelve years of staying abroad; The media is in a frenzy about the return of their charming and undeniably rich “native son”, as they call it. Jim Gordon, on the other hand, arrives quietly by train, with only a Detective Flass to greet him. Despite the stark contrast between Bruce’s and Jim’s welcomes, the two men share one thing in common: they do not really hold Gotham in their highest esteem. As both men struggle with their new lives, they learn some things you would only learn in a messed up city like Gotham.

I really liked how the movie stayed faithful to the graphic novel. It serves as a good companion to the series, and it doesn’t really matter if you read the book or not. This is as complete and true to the story as you could expect of any film adaptation. Despite that almost panel-by-panel animation, I couldn’t help but miss David Mazzucchelli’s vintage style. Still, this is a tiny scruff on a spotless film. If you haven’t read it in a while, you could watch this instead if you’re pressed for time. Whether you are a comic veteran or not, I am sure this movie would prove to be a delight.